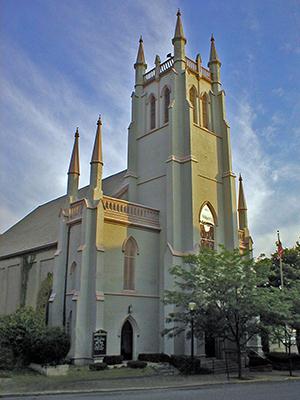 Westminster Moriah Olivet Presbyterian Church is a new community of faith created from three Presbyterian churches in Utica, each of which had their own wonderful history.

The Moriah Church was begun in 1830 by people of Welsh descent who were called “Calvinist Methodists.”  (This traditional later developed into the Presbyterian Church of Wales.)  In 1882 they constructed the impressive building on the corner of Dakin and Park Ave. in Utica where they were one of the leading Welsh congregations in North America. Congregational singing in strong 4 part harmony was one of their distinguishing gifts and to this day many people enjoy attending special Welsh hymn singing festivals called “A Cymanfa Ganu.”

The Olivet Church was born as a mission Sunday School formed by the people of the Westminster Presbyterian Church in 1876. By 1879 its membership was already at 400 and so they formed a new church built on Howard St. in the Cornhill section of Utica. It was dedicated in 1891.

As time and change occurred, both the Moriah and Olivet churches found that they could be stronger together than separate. So, in 1982 they formed the Moriah Olivet United Presbyterian Church housed in the former Moriah building on Park and Dakin.

Westminster Church was formally organized in 1844 on Devereux St. but, after the building was destroyed by fire, the church on 714 Washington St. was constructed and occupied in 1855. In the early 1920s the 3 story Parish House with gymnasium , classrooms and meeting rooms was constructed and has been actively used by the larger community ever since.

In the Fall of 2007 Moriah Olivet left its church building and came to the chapel at Westminster to “nest,” as a distinct congregation but housed within the same building complex. For several years they carried on their worship and ministry, sharing from time to time, with Westminster in special services. In 2013 the Presbytery of Utica affirmed the request from the people of these congregations, to become a new “merged church.”  So, we have begun to make new history, and we like the congregation we are becoming together!